COVID-19 MESSAGE: Birches At Villa Rica is Here For You! Click for Details
Now Open! Reserve for site tour.

What Music Can Do for You and Your Senior Loved Ones 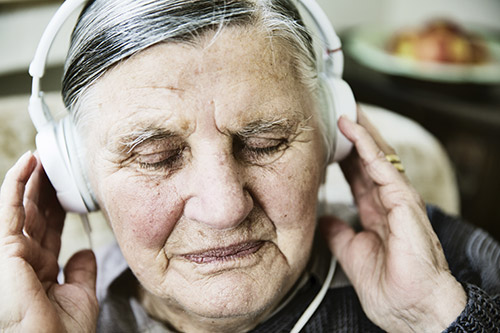 The therapeutic nature of music is something for all of us to consider. Today’s blog post will primarily focus on the therapeutic effect that music can offer your loved one living here in our senior assisted living community or our memory care community. We’ll touch on the scientific evidence of this in a moment, but first a practical testimony from the laymen’s perspective.

We were talking with a resident’s daughter this morning who shared the story about how her son hosted a couple of his college buddies at her house over the weekend. She loves the boys and lovingly welcomes them repeatedly to stay at her house. But their college kids. Loud, fast, funny, and stay up way too late. She loves them and their youthful energy. She does not drink alcohol, but she envisions how she feels this morning to that of a hangover after a long weekend of partying. Her remedy you ask? She reprograms “Alexa” away from the rock and roll channel of the past few days and asks her to play “soft classical”. She sits and listens with eyes closed and decompresses. Better than aspirin she says.

So now we transition away from simple feelings about the benefits of music to the science of it all. We covered this story of scientific research regarding music but feel it is more than worthy of a revisit. Modern researchers have discovered that music soothes those suffering from dementia, and/or Alzheimer’s disease. Researchers at The University of Utah Health recently tested whether they could alleviate anxiety in seniors suffering from dementia by playing familiar music to them using headphones and a hand-held music device. Anxiety and agitation are two of the most disruptive aspects of living with dementia and Alzheimer’s disease for both patients and caregivers.

After the researchers helped the patients pick meaningful music, they used a functional MRI to record the changes in the brain while the music played. The brain images showed that music helped the areas of the brain known as the salience network, the visual network, the executive network, and the cerebellar and corticocerebellar networks all work with better connectivity. These areas of the brain activate language and memory, according to the study’s authors.

“When you put headphones on dementia patients and play familiar music, they come alive,” Jace King, lead author of the study, said in a press release. “Music is like an anchor grounding the patient back in reality.”

Music and movement are the last things to go in the brain.

It’s almost miraculous what music can do for Alzheimer’s patients and the research about the benefits is there.

Health care providers have seen firsthand how much music helps dementia patients. with the clients there.

Play songs from their era that they might recognize. Patriotic songs are also popular.

Music touches people on so many levels.

The reaction by dementia patients to music was also dramatically demonstrated in the 2014 documentary, Alive Inside. Elderly care professionals can set up personalized playlists on iPods for their patients. The music helps the patients access the deep memories not lost to dementia. It also helps them converse and socialize in ways they weren’t doing before the familiar music became a part of their daily life.